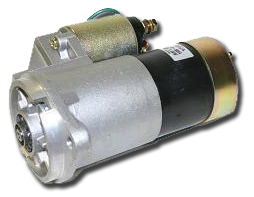 Automotive Starters Repair – Orozco’s Auto Service in Long Beach & Bellflower Modern cars use electric starters, which in essence is a relatively small motor which is driven with higher voltage and current than would be reasonable for continuous operation, allowing it to deliver enough power to crank the engine to start it. At such a high voltage level, a starter motor would burn out in a few minutes of continuous operation, but not during the few seconds needed to start the engine.

There are a few separate Components to a starter motor – one which most commonly fails is the starter solenoid. The started solenoid acts like a relay, engaging a lever that engages the starter and closing high-current contacts for the starter motor circuit. Because of the high-voltage characteristics of an electric starter motor, to save weight and cost, they are designed to operate for typically around 30 seconds at maximum before overheating. For this reason, it is advisable to pause for at least ten seconds after about ten seconds of trying to start an engine that is not starting.

How can you tell if you have a bad starter, as opposed to a bad battery or another component failure?

Sometimes, the symptoms of a bad starter are actually similar to those of a bad battery. Your car’s headlights or dashboard lights may get dim when you crank the ignition, and your engine may turn over very slowly. If your car makes a steady clicking noise but does not turn over, then you most likely have a dead battery. However, if you turn the key to start and either nothing happens or there is a single, quiet click, your starter is most likely worn out. The metal brushes inside of the starter wear out, causing bad electrical contact. It is possible that, after waiting for a time and letting the starter cool down, it may start again. Another way to get your car started is to tap on the starter with a hammer, which can knock the brushes back into place and let your starter work again. It may even continue to work for several weeks without much issue. However, it will inevitably die completely, and as soon as you encounter starter trouble it is advisable to get it replaced instead of risking your car not starting in a critical situation.

It is impossible to prevent your starter motor from wearing out eventually. But when it does, Orozco’s Auto Service in Long Beach is here for you. We can fix or replace your starter, and keep you from being stuck without a ride. If you’re having trouble starting your car, call our certified mechanics today at (562)-427-4256 and schedule an appointment today! Orozco’s Auto Service can figure out why your car isn’t starting and fix the problem.